Creating a Just Country – can Scotland lead the way? 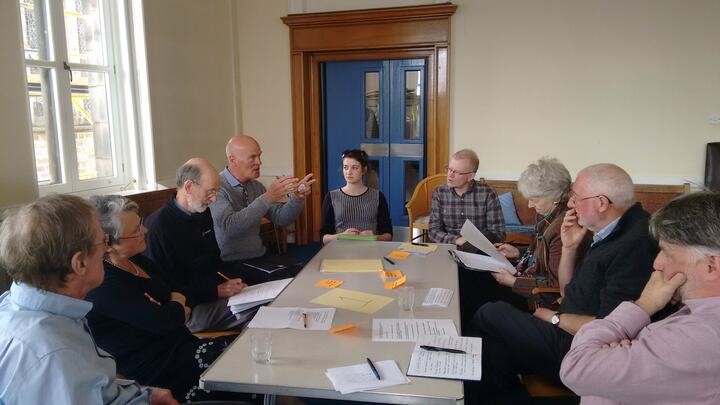 In 2015 British Quakers committed themselves to give priority to working with others to identify and address the root causes of inequalities in our society. With increasing powers devolved to Holyrood, are some Quakers right in believing Scotland can show the rest of the UK the way?

Following a successful symposium hosted by Quakers in Scotland last October and attended by some 200 people, a seminar for invited participants took place in Edinburgh Meeting House on 22 April. In addition to Quakers with interest or expertise in tax and justice matters, the seminar was attended by representatives of Christian Aid, Positive Money, the Iona Community, Oxfam, the Citizens Basic Income campaign, Community Climate Action and others. Jon Mason, an SNP MSP and former member of the Holyrood Finance and Economy Committee, was also in attendance.

The seminar was addressed by Michael Keating, Professor of Politics at Aberdeen University and Director of the Centre for Constitutional Change at Edinburgh University. He began by raising the question ‘What is the purpose of Scotland having new constitutional powers’, suggesting we need first to define what sort of society we want, and then explore what powers we need to deliver it.

Michael challenged the currently normative view that social inequality is the price of economic growth; that rich people need higher salaries and poor people need lower wages to work harder. He quoted evidence from academic research that it is not the case that unequal societies do better and increasing taxation does not necessarily harm the economy. Small countries can do well when there are high levels of social investment.

We spent much of the day in two discussion groups, from which the following three areas of interest emerged, which Scottish Quakers
will take forward in our future work.

General Meeting for Scotland’s Parliamentary Liaison Group is grateful to the Joseph Rowntree Reform Trust, which funded both the October symposium and this seminar.

This article first appeared in the May 2017 Scottish Friend