General Meeting acts on behalf of Britain Yearly Meeting in such procedures as may be required by the Scottish parliament and Scottish legal affairs. General Meeting is a member of ACTS (Action of Churches Together in Scotland) to which it appoints representatives. General Meeting itself meets quarterly for business, normally in Aberdeen, Dundee, Edinburgh, Glasgow, Inverness, Perth or St Andrews. These meetings are open to all members of the Religious Society of Friends in Scotland. Non-members may request permission to attend. General Meetings also provide an opportunity to talk with Friends from a distance and to hear invited speakers. The General Meeting also publishes a newsletter "The Scottish Friend".

To organise business and carry through the decisions, General Meeting has a Central Committee, and sub-committees known as Function Groups. These Groups deal with the agenda for General Meeting, nominations, communications and outreach, parliamentary liaison, and children and young people. They usually have representatives from the four Area Meetings, to provide a geographical balance. Telephone conferencing is often used to save on travelling time, though the value of personal meetings is also acknowledged.

A list of members is kept and distributed to meetings. It is not circulated outside Friends circles, and Members and Attenders are only included in the printed booklet with their permission. Download a consent form and hand it in to overseers in your local meeting - please!

Area Meetings (previously known as Monthly Meetings) were originally intended to hold monthly business meetings, but the distances in Scotland mean that our Area Meetings meet less frequently. The four Scottish Area Meetings (North Scotland, East Scotland, South East Scotland and West Scotland) are made up of 33 local meetings. (An Area Meeting is roughly equivalent to a presbytery.) The business conducted at Area Meeting includes membership, marriage arrangements, ownership of property etc. Area Meetings send representatives to other bodies, including the national executive committee (for historical reasons, called Meeting for Sufferings) which meets five times a year at Friends' House in London.

Local Meetings (previously sometimes called Preparative Meetings: Find a meeting in Scotland) are the worshipping groups which meet regularly, usually on Sundays. A Quaker Meeting for Worship is based on silence, an expectant silence of waiting, in which we seek to come nearer to each other and to God. Occasionally a Meeting will pass in total silence. The silence may be broken if someone feels compelled by the Spirit to speak, pray or read. The Meeting ends after about an hour with the shaking of hands. 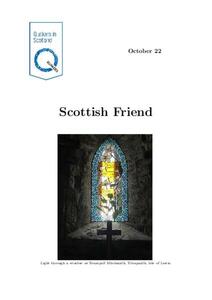