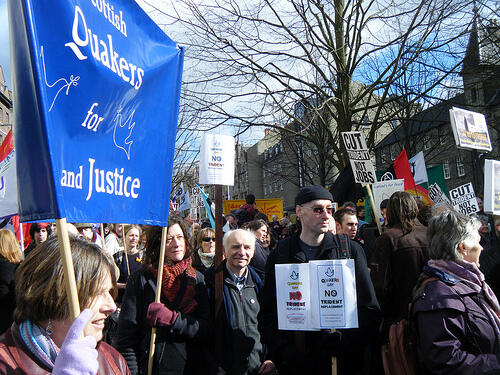 Quakers see peace as more than opposition to war and physical violence. It is a comprehensive approach to living in the world, which includes handling conflict in nonviolent ways and ensuring we avoid ways of living which damage the earth, and which might sow the seeds for future violence. We believe that violence and the injustices that often give rise to it are not inevitable, but the consequences of human decisions and structures. This also means that human actions can change the world for the better.

This leads us to work for a ‘just peace’, a peaceful world which is underpinned by principles of equality and justice. It means working for an end to oppression and discrimination, and doing work that prioritises both structural (rules and cultures) and personal (hearts and minds) changes.

Quakers believe that schools are a place for learning and educating. While part of that learning and education will include understanding past and present in a balanced way, the visits of armed forces to schools often have no balance to them, and depict army life as glamorous, without warning pupils of the worst health outcomes child recruits experience throughout and after their army career.

Quakers are not seeking to sever the existing relationships between schools and the armed forces, but rather to make sure those relationships are balanced, paint an accurate picture of life in the armed forces, and that those pupils who contentiously object have an opportunity to do so by being informed of visits in advance – which currently does not always happen.

The UK is contravening the recommendations of the United Nations Committee on the Rights of the Child by having recruitment activities within schools.

Along with ForcesWatch, in 2016 Quakers in Scotland submitted a petition on armed forces visits to schools to the Public Petitions Committee of the Scottish Parliament. The petition and all evidence submitted to the Committee can be read at http://www.parliament.scot/GettingInvolved/Petitions/armedforcesvisitstoschools

A Peace Institute for Scotland?

Scottish Friends along with colleagues from Britain Yearly Meeting took part in round-table talks with an independent working group advising the Scottish Government on their plans for a Peace Institute.  We emphasised the need for such an institute to have a focus on the positive role of peacebuilding, evidenced by a policy of peace-related education in schools.

Plus … Other peace projects and issues we have worked on have included: