Quakers mark century of the right to refuse to kill 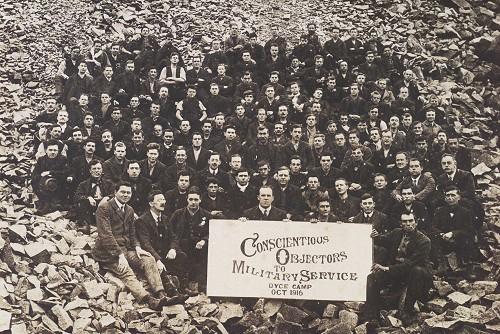 In the midst of World War I, Quakers worked to ensure the recognition of the right to refuse to kill.

Faced with the colossal death toll, the British Government brought in conscription with The Military Service Act. Quakers worked with others for the clause giving men the right to conscientiously object to being forced into combat.

The centenary of this key moment in establishing freedom of conscience and individual rights will be marked with events in Westminster and Holyrood. Readings from the diaries of conscientious objectors will bring alive the plight of Quakers imprisoned for their conscience. Speakers will bring up to date Quakers’ historic commitment to nonviolence.

Paul Parker, Recording Clerk for Quakers in Britain said: “The courage of those men who were so often called cowards can still inspire us to work for a more peaceful world.”

In London, Quakers in Britain are inviting MPs, peers and ambassadors, descendants of conscientious objectors, representatives of faith groups and the charity sector to “Conscientious Objection: 100 years on”, at 6.00pm to  8.00pm, on Wednesday 27 January, in The Attlee Suite, Portcullis House, Houses of Parliament.

The evening will include

Attendance at both events is by invitation.

Media welcome to attend in Westminster or Holyrood. Requests for accreditation to annev [at] quaker.org.uk

Picture of conscientious objectors in Dyce workcamp from archiveshub.ac.uk. This Press & Journal article has a short history of this camp In Dyce, where 250 men broke chunks of granite in poor conditions, and where one inmate died.