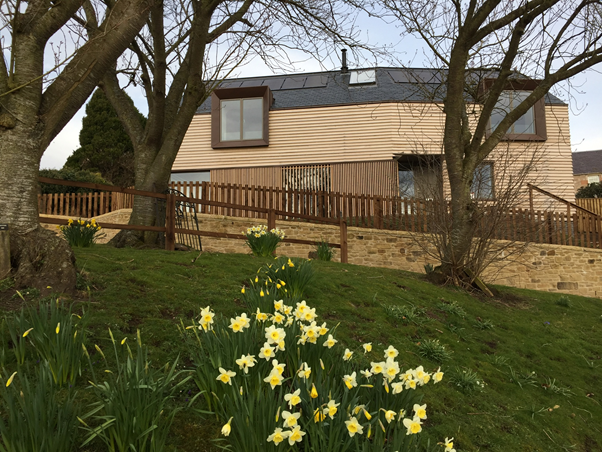 Kate Atchley, an attender at Kelso meeting, has  built her own eco-house. She loves it, but it  was not all plain sailing …!

For some years, Kate lived in Ardnamurchan. But a move nearer her children gave her the lifetime opportunity to build a future-proofed, eco-friendly house in the Borders, completed in March 2020.

When she decided she would try to build from scratch, Kate looked at 15 plots over 2 days. The only one she liked was a south-facing plot overlooking the River Cheviot. It already had outline planning permission (though for a slightly smaller house than she finally built).

One the architect-designs were done, an appointed contractor (local) ran the project, undertaking all the groundwork, drainage, walls and hard surfacing. The rest – heating, roof panels, roofing, zinc cladding, joinery, plumbing, electrics, tiling – was sub-contracted locally.  ‘Most of the guys’ she says,  ‘liked the contemporary design of the house and everyone seemed eager to do their best work. I was very fortunate.’  Kate lived in a rented cottage nearby  for 3 years before and during the build.

However there were hiccoughs and unexpected extra costs. The foundations had to be dug deeper than expected because the soft topsoil was deeper than expected. And an old drystone wall collapsed when the site was cleared. So a new wall was needed. The building inspector asked for fire-retardant paint on some surfaces only after they had been already painted. Delay in ordering high-quality kitchen cupboard doors resulted in a significant price leap.

Then there was the problem of draining water running off the roof and hard surfaces around the house. ‘Many drains around the country are old and a bit overwhelmed,’ says Kate. ‘Last winter was the wettest for 150 years – sign of climate change. There were reports of sewage overflowing into some rivers.’  To help mitigate these problems, new regulations now ban surface runoff being fed into the usual drains. The ground around the house was clay and non-porous so another solution was needed. Kate had hoped the runoff could be channelled into a nearby stream, but the local estate ‘requested too many noughts after the figure first thought of’. In the end, 40 drainage pipes of 40mm width were sunk 6 metres down under the clay topsoil to porous rock beneath – a costly exercise.

‘There were lots of snags; it was very stressful at times’, Kate says. ‘In the end, the house cost 160% of the original budget. Unless you have very deep pocket, I wouldn’t recommend embarking on a unique project like this. But there are well-designed kit houses from suppliers such as HebHomes and R.House which deliver eco-friendly solutions at much less cost.’

But she now loves it. And having chatted about bees and consumed lots of Kate’s honey during the build, her joiner has taken up beekeeping with a colony from Kate.