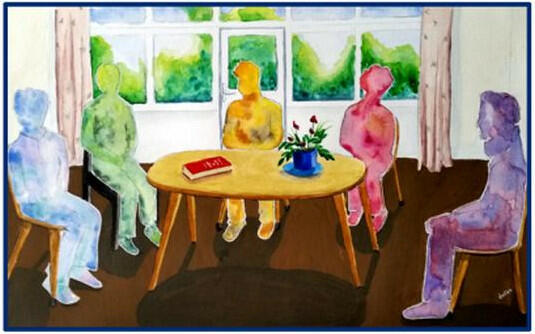 This online event (via Zoom) is for those who wish to explore what it means to be a Quaker in Scotland today.

We will share our experience of Quaker life through group discussion and conversations in small groups. We will point you towards helpful books and other Quaker resources. We will answer any questions you may have about living as a Quaker and about the process of moving from being an attender to applying for membership.To book your place. please visit http://bit.ly/xquakerlife

Here's one person's story of her journey to Quakers:

'I was raised Catholic in the USA. I had never thought of the Quakers as anything other than the graphic on the cardboard tub of oats.

At some point, as I was gaining awareness of the world, I grew apart from the Catholic church of my youth. I went along with friends to their own churches on Sundays. I attended Baptist, Methodist, Unitarian, and Messianic Jewish services. My closest friends were atheist, pagan, and Muslim. I joined a mission trip with the Methodists, helping re-roof a house of a parishioner from a sister church in the south of the US and absolutely loved the community spirit and the coming-together — but I still didn’t feel like I belonged.

I didn’t believe in the Christian God as I was taught about in Sunday school. I believed that “God” was a metaphor, a way of understanding the universe and its mysteries. The word “God”, to me, meant the personification of the sum of all things. I felt like I could call myself agnostic, atheist, pantheist, or even pagan, and felt like I could say that I led a life of Christ — but I still didn’t feel like any of those labels quite fit.

I took philosophy classes and an ethics class in college. I spent a lot of time thinking about my own beliefs and looking at those of others. When I moved to the UK for university, I continued trying to find a church that felt like “home” in the same way as my friends felt at home in their churches, with a community who felt how I did rather than seeing me as someone who needed to be “brought in to the bosom”, an outsider.

I attended Catholic services, Anglican services, a Church of Scotland service, and then found the Humanists when I moved to Cambridge. I felt at home with the Humanists there and enjoyed a Sunday brunch where we’d discuss ethics and philosophy and “goodness” and such things. When I moved back to Scotland, though, the Humanists didn’t meet at a café, they met at the pub, and they would still discuss ethics and philosophy but it didn’t feel the same, it didn’t feel like “home”.

I had children and started getting involved with the new-parent community. I met a mum at the train station in Edinburgh who had a lovely carrier and I’d invited her along to a baby sling group that I organised in Falkirk — and she came! We became close friends and, when conversation turned to ethics and philosophy and “goodness”, she said she was raised a Quaker but her life had gotten busy and she hadn’t attended in a long time. She said that my own philosophy of “God” wasn’t at all dissimilar to her own, and that the community was absolutely like the community I had lamented not finding. She found a Meeting that was close to where I lived and we attended together with another close parent-friend.

I’ve found the community feeling that I had been searching for and I do feel completely at home with the Friends that I have met. My husband, a “devout atheist” also feels comfortable at Meetings, and my children absolutely adore attending. I still feel like I’m settling in and feeling my way around, but I do absolutely feel like I’m at home.'